How Vijay Singh tapped into his tournament swing data at Furyk & Friends — legally! JACKSONVILLE, Fla. – Vijay Singh wasn’t checking the time on his wrist obsessively during Furyk & Friends at Timuquana Country Club because he had an important date after the round. Rather, he was wearing a golf swing analyzer on his wrist called deWiz, which measures swing data in real time such as length of backswing, tempo and transition.

The device, which is being used within the Rules of Golf and received approval from PGA Tour rules officials to be worn in tournament play, was used by Singh, an investor in the company, at the PGA Tour Champions event and marked the first time the wearable technology was put in play on a major global tour.

Singh, who has used the app to try to lengthen his swing, wore the device in tournament or “stealth” mode, meaning it simply collected and aggregated all the data from each swing and didn’t provide any feedback. But during practice, it syncs to an app on your mobile device and instantly sends a 3D rendering of your swing. 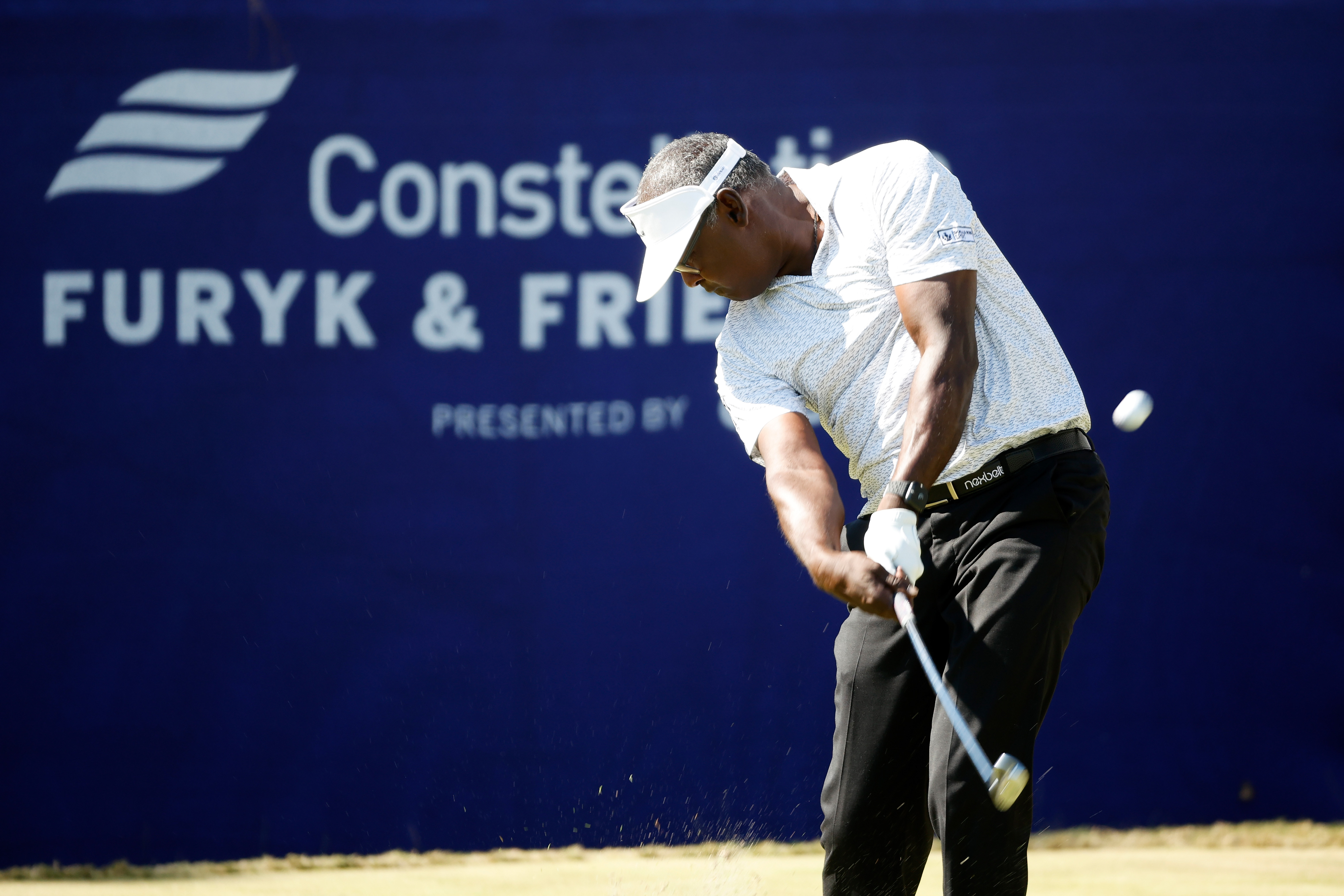 Vijay Singh of Fiji plays his shot from the 17th tee during the second round of the Constellation FURYK & FRIENDS at Timuquana Country Club on October 08, 2022 in Jacksonville, Florida. (Photo by Cliff Hawkins/Getty Images)

Quass Singh, Vijay’s son, explained that if his father hit a bad shot, for instance, at No. 10, he could call up the shot after the round and learn that his swing on that particular shot was .05 seconds faster than the previous swing.

Singh also noted the benefits for amateurs. The device features a patented learning stimuli that delivers a light electric impulse if the swing goes off key. For those masochists out there, it can be set higher to resemble an electric shock. Pick your preference and then set the swing parameters in the app and if you break those thresholds, it instantly alerts you.

“Say you’re swinging over the top. It’s tough to fix that,” Quass Singh said. “But with the device, you can teach your brain subconsciously how to not do what you don’t want it to do.”

So, what did the analysis of Vijay’s swing during a competitive tournament reveal? DeWiz officials shared some of the preliminary findings from his data:

In general, Vijay was slower, longer and more over-the-top on the range vs in competition

We also were tracking some advance data that currently is only available to our deWiz Coaches – including initial downward direction – which showed Vijay was dropping his hands more in transition on some shots deemed “misses.”  We also saw that Vijay was slightly faster on his backswing on Vijay’s “misses” compared to his best shots.

Lastly, we can see how Vijay maintained consistency with his length of backswing and tempo under pressure way better than a club golfer. Research of regular golfers using deWiz on-course shows a greater drop in length of backswing and changes in tempo. Vijay was less than two inches shorter in his LoB between course and range (which is significant), but we see club golfers are usually 6 inches less (or 10 percent) of their average LoB on the range.

The deWiz wearable technology possesses the potential to bridge the gap from the driving range to the first tee and provide full-swing analysis. 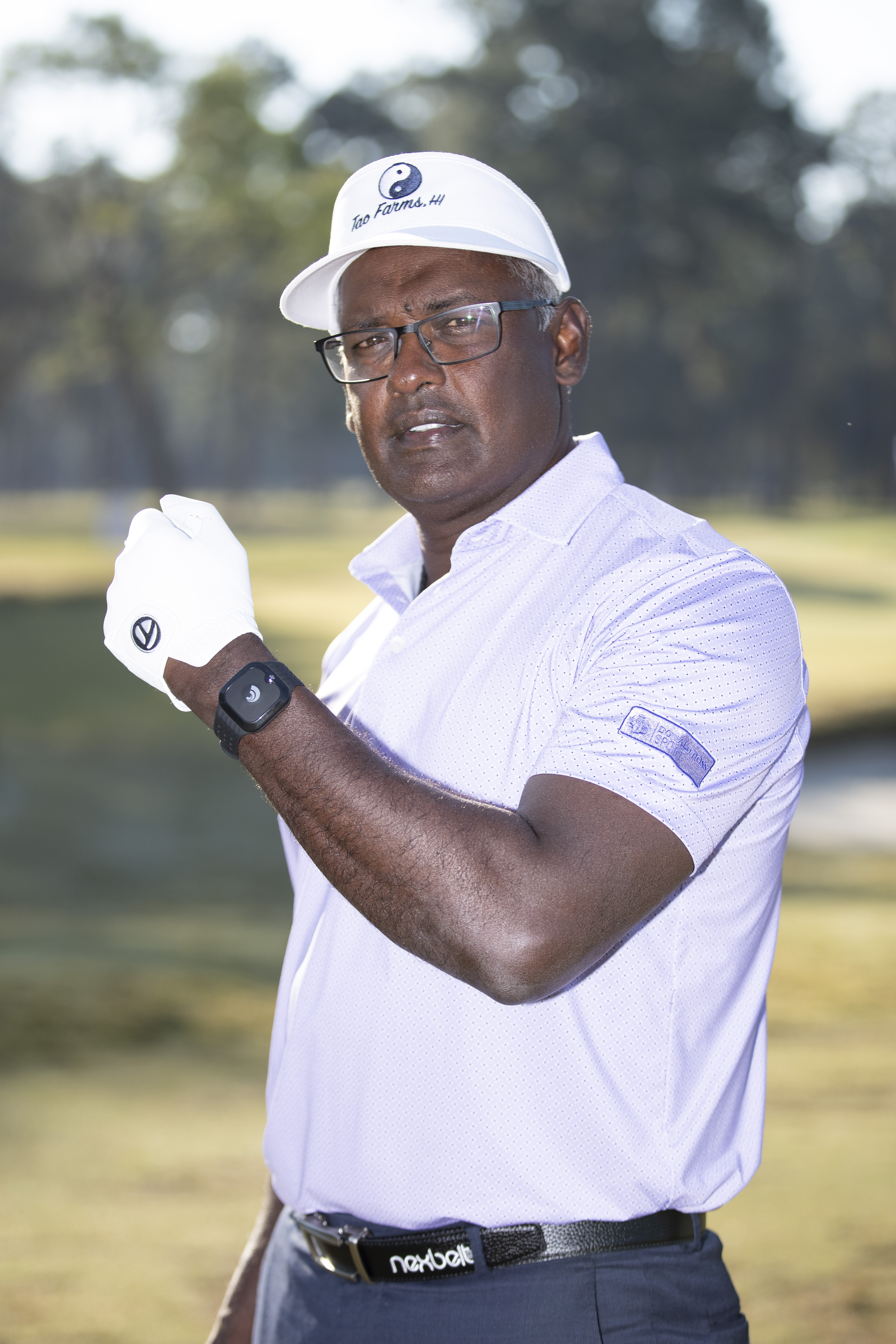 Vijay Singh shows off his deWiz watch prior to the final round of the Constellation FURYK & FRIENDS at Timuquana Country Club on October 09, 2022 in Jacksonville, Florida. (Photo by Cliff Hawkins/Getty Images)