America’s funkiest 32-hole golf facility is in Troutdale, Ore., about a 30-minute drive east of downtown Portland. Yes, it’s also likely America’s only 32-hole golf facility, but if there were another option, it would not rival Edgefield Golf Course, purveyor of mountain views, hippy flair, 100-plus years of history and a dizzying array of locally-sourced booze. Informally, Edgefield is known as the Pub Course — it’s right there on the scorecards — so that is what we shall call it.


There are actually two courses at the Pub Course: the East, which has 12 holes and green fees of $14, and the West, which houses 20 holes and costs $22. There are no bunkers nor a drop of water. The longest of all the holes — the closer on the West — is an 84-yard monster, which tells you these courses are short. You might be tempted to call them pitch-and-putts but that doesn’t do them justice. Pitch-laugh-drink-pitch-again-breath-in-the-fresh-Oregon-country-air-pick-some-apples-drink-again-and-putt would be a more apt moniker. Dress code? Please. Turtlenecks, tank tops, whatever’s in your closet will work just fine. 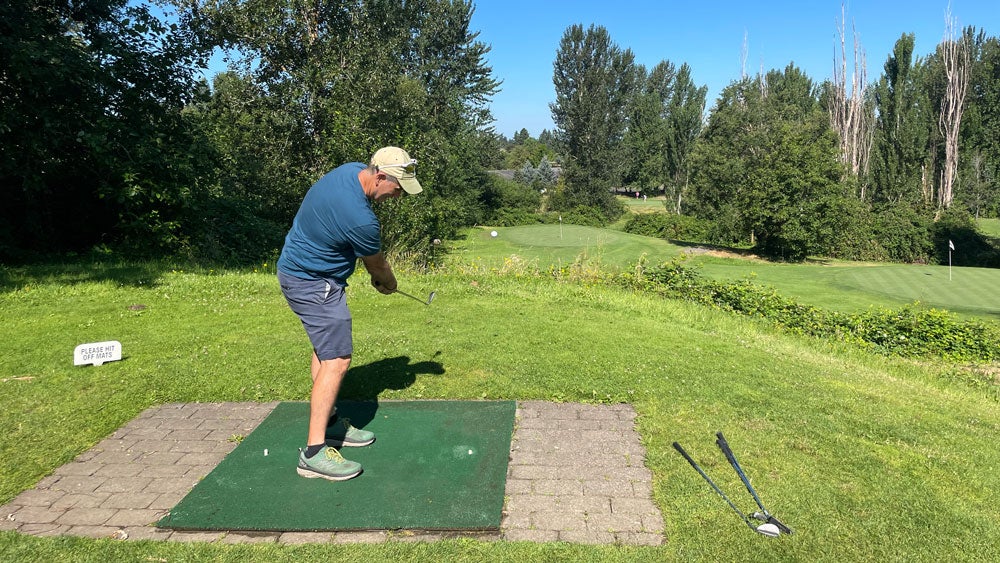 The 2nd tee on the East course, with the 1st green to the right.

The Pub Course’s laissez-faire vibe first hits you in the golf shop, which doubles as a watering hole. Or maybe it’s the other way around. There’s a loaner bin full of wedges and putters; a wood box filled with pencils and scorecards; and a row of beer taps behind a bar serving IPAs with names like Sunflower and Nitro, plus two types of cider. On a wall hangs a rendering of the Pub Course’s de facto mascot, Seamus MacDuff, Shivas Iron’s bearded mentor from Michael Murphy’s cult classic, Golf in the Kingdom, which locals will tell you inspired the Pub Course. That’s wholly plausible because the place has a mythical quality to it.

The first permanent inhabitants of the hilly property arrived in 1911, when the county built a “poor farm” here, a social-welfare construct that was “based on the belief that the poor could enjoy fresh air and country living while growing their own food,” reports Sharon Nesbit, founder of the Troutdale Historical Society. Later that same year the county opened a prison on the farm and brought in more than 200 inmates, many of whom helped work the land. Over time, though, the communal-farm concept lost its effectiveness and by the mid-1960s the main building on property had been converted into a nursing home. Over more time, the entire property fell into disrepair. Its future looked grim; without a spirited fight from local preservationists, the buildings on-site would have been destroyed.


That campaign gave Portland hoteliers and restauranters Mike and Brian McMenamin enough time to see the value in the property. The brothers acquired the land in 1990 and transformed it into what is today: a rustic trippy funtopia, with a hotel, brewery, winery, distillery, gardens, concert venue, and, yes, 32 golf holes.


On a sun-splashed morning last summer, I played the East course with my brother, Eoin, and his wife, Kim, who have lived in Portland for more than two decades, and my 12-year-old son Henry. You wouldn’t call any of them serious golfers and we struck far more bad shots than good. Then again, good golf isn’t really the goal at the Pub Course — having a good time is.

As we ambled across the land, through blackberry thickets and overgrown shrubs, nearly every hole surfaced a new curiosity, beginning on the first tee, which sits next to stone-wall ruins. The old jail is still intact, too, to the left of the 7th hole. By the 9th tee: a towering concert stage on which the likes of B.B. King and Ringo Starr have jammed. The walk from 10 to 11 takes you past the winery and a lot full of wine barrels perched on stands. My favorite moment came near the 11th green, which is home to a cluster of apple trees. Apples, it turns out, are just as fun to chip as golf balls.

also, not to brag, but my SG: apple-chipping was +7.04 pic.twitter.com/KSemdfTj37

After our round, we grabbed an IPA at one of the property’s many charming mini-pubs, the Little Red Shed, then toured the Georgian-style hotel, where murals of the poor farm’s former residents adorn the walls and rooms can be had for as little as $65 (if you’re cool with a common bathroom). Next up: lunch at the Loading Dock Grill, which serves up juicy cheeseburgers, Scooby Snacks (aka mini corn dogs) and McMenamins fries with a side of “mystic 18 sauce.”


Stuffed on shoddy golf shots and salty meat, we headed back to the parking lot and piled into the car for the ride back to Portland. Only then did we realize we had forgotten to visit one of the Pub Course’s highlights: a 7-foot statue of Jerry Garcia — the McMenamins are big-time Deadheads — that is nestled in a grove near the 9th and 10th holes on the East course. It’s made of bronze but looks like it was carved from a rotting tree.

“You can see that he is picking the brain of the skull that forms the body of his guitar,” its late creator, Joe Cotter, said years ago. “And his right arm and fingers of his left hand are missing, gone — dead, not coming back.”

On the drive out, we pulled over, wandered into the woods and found Jerry. We made peace signs and laughed and posed for photos. What a long strange wonderful golf outing it had been.